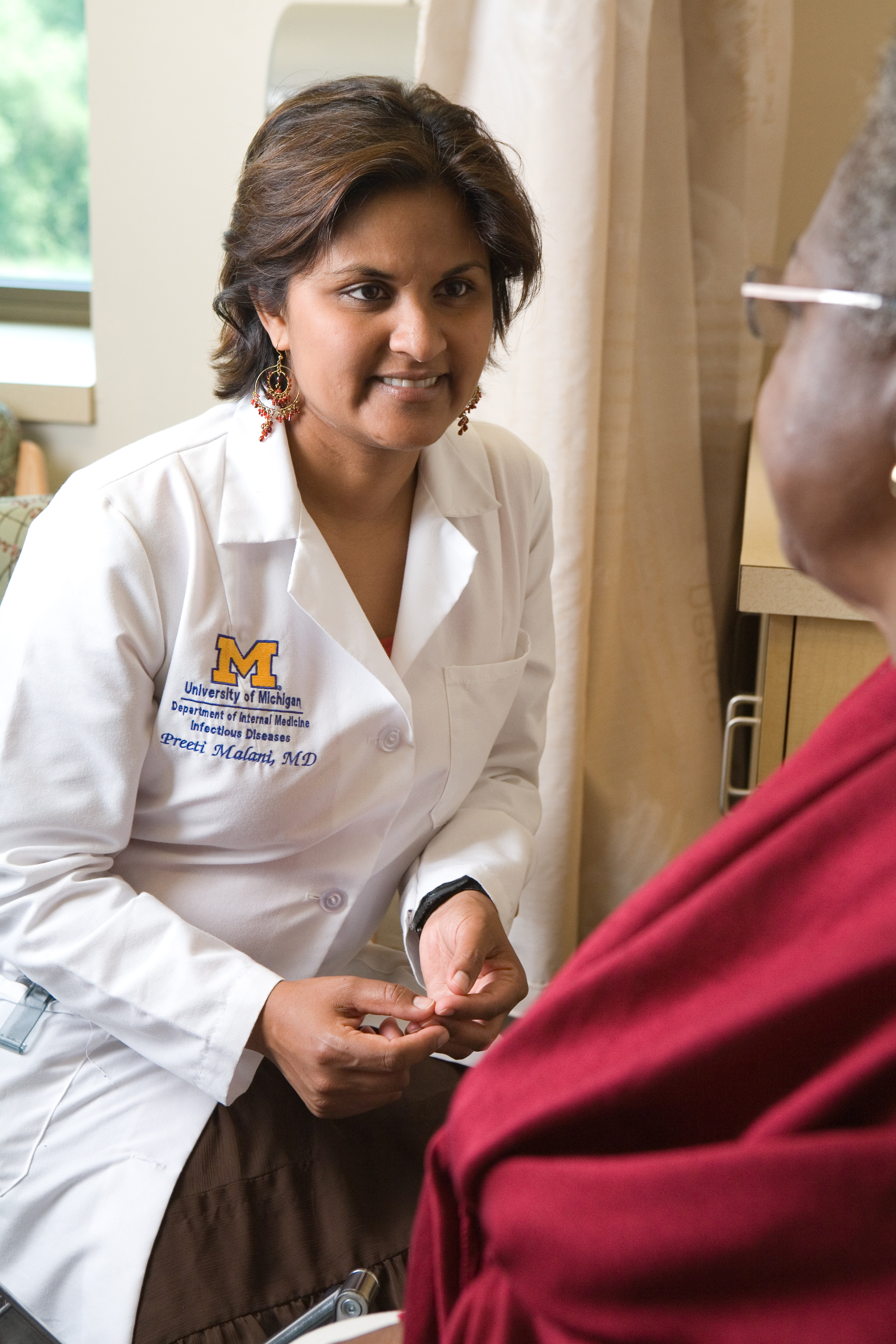 Preeti Malani is professor of medicine at the University of Michigan. Prior to medical school, she completed a master’s degree at Northwestern University’s Medill School of Journalism and is currently an associate editor at JAMA (The Journal of the American Medical Association).

CMOS: How did medical school happen after you seemed set for a career in journalism? Was it your intention all along to combine the two?

PM: My path to medicine has been nontraditional and somewhat serendipitous. My interest in journalism dates back to high school. It’s a long story, but the quick version is that my ninth-grade algebra teacher refused to sign a waiver that would have allowed me to double up on math the following year. His assessment was absolutely correct. Two math classes would have been a disaster. This left an opening in my schedule, so I decided to take journalism as an additional class. This seemingly random decision changed the trajectory of my entire life.

Journalism made sense to me in a way math never did. Twenty-five-word leads, inverted-pyramid style, who, what, when, where, how, and why . . . all of those “rules” helped me develop a clear and efficient writing style. I became the editor of my high school paper and also wrote a weekly column for our local paper. By the time I started college at the University of Michigan, I had a clear interest in medicine as well as journalism, but I didn’t really know how to combine the two.

At Michigan, I wrote for the Michigan Daily and a variety of other student publications. If I had grown up a few years later, I definitely would have been a blogger. Michigan didn’t offer an undergraduate degree in journalism, but I was able to design an independent major in “medical journalism.” Medicine was still on my mind, but I wasn’t sure it was the right career for me. When I was almost ready to graduate, I hadn’t completed all of my pre-med requirements. Almost on a whim, I decided to apply to the graduate program at Northwestern’s Medill School of Journalism.

The summer before I started at Northwestern, I did an internship at the Dayton Daily News in Ohio. One day my editor sent me out to cover a story about a young man who had died in a motorcycle crash. His family had made the decision to donate his organs for transplantation. As I interviewed his grieving parents, I remember feeling extremely uncomfortable intruding on this poor family and maybe adding to their pain. I also couldn’t help but feel that I wanted to be on the other side. I wanted to be the one harvesting the organs, not writing about it. I went home that night and began typing up my application to medical school.

CMOS: During your time at Medill, did your interests center on medical writing and editing?

PM: Yes, especially after I was accepted to medical school early in the year. Although I learned about writing in general, I also took a seminar in science writing and a magazine writing course. As part of the science writing class, I got to spend a few days at JAMA. One of the assignments was to write an obituary that was later published. I still like to joke with my colleagues that my first publication in JAMA was accepted before I even started medical school.

CMOS: At what point did you decide to focus on infectious diseases?

PM: When I started medical school, I was interested in urban health and health policy. I thought I wanted to focus on women’s health or work with high-risk adolescents. As I began my clinical clerkships, I quickly realized that I was made for internal medicine. I loved asking questions, finding answers, and digging deep in order to understand the most complex medical issues. Working in infectious diseases mirrors a lot of what I learned in journalism. We don’t do anything with our hands—it’s the ultimate thinking specialty. Even today, much of what I do begins by taking a detailed history—asking those odd questions like what kind of water you have at home (city or well), whether you’ve been around any parturient goats, and whether you drink raw milk. Infectious diseases is perhaps the most dynamic field in all of medicine. Things are always changing.

CMOS: Did you always focus specifically on the elderly?

PM: My interest in geriatrics is also somewhat serendipitous. My husband’s fellowship moved our family to Portland, Oregon, in 2003. I wasn’t able to find a short-term position in infectious diseases. I had always been interested in older adults, and the opportunity came up to do a fellowship in geriatric medicine. I look back at that as one of the best professional decisions I’ve ever made. Training in geriatrics was transformative—almost like learning a new language. I think of myself as “bilingual” and able to communicate with clinicians from different disciplines. The perspective of a geriatrician is vital to so many aspects of patient care. While many physicians think about “cure,” I tend to think more about “function” and whether someone can remain independent and have a good quality of life.

PM: Having formal training in both writing/editing and medicine is a unique skill set. Very few people have this combination. Without question, my training in writing and editing has helped with academic productivity. I was able to write lots of papers and edit several books relatively early in my career. Most physicians who become editors learn by becoming excellent researchers and writing dozens of academic papers. Many physicians learn to write with the help of a mentor—someone who takes the time to mark up a draft with lots and lots of red ink. It’s an apprenticeship of sorts.

CMOS: Were there aspects of publishing a medical journal that you still had to learn?

PM: Although I understood both the writing/editing and clinical aspects of medical publishing, one of the areas I had to learn about was research methods and statistics. This specialized knowledge is essential to being an editor of a journal like JAMA. For me, that has required a lot of reading and asking questions as well as formal study through a master’s program in clinical research. I still struggle with complex math (that hasn’t changed since high school) but I have a solid foundation in epidemiology and biostatistics, so I can ask the right questions.

CMOS: Your Twitter feed seems to include a fair amount of commentary on (ahem) football. Did a career in sports journalism ever tempt you? 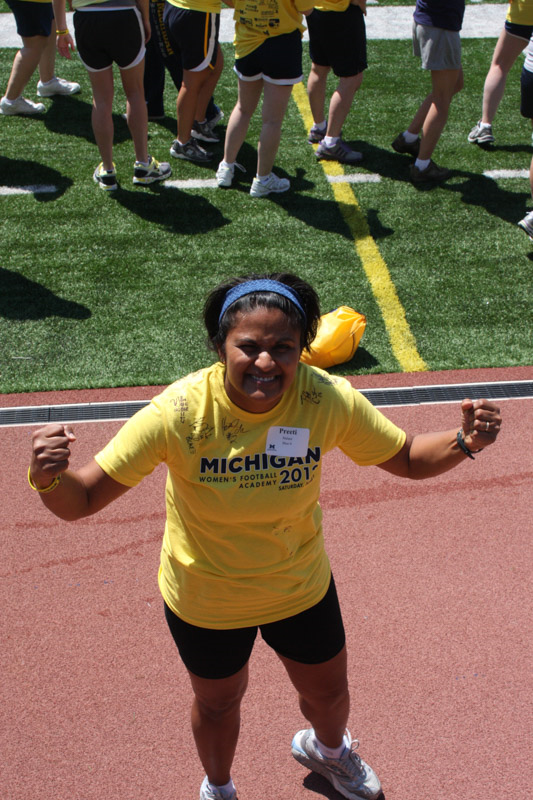 PM: I’m fairly new to Twitter, but yes, I have been doing a lot of “trash tweeting,” especially about my Michigan Wolverines. I essentially grew up with two brothers, my actual brother and my cousin who is like a brother to me. As children, we spent hours trading Topps baseball cards and mini NFL helmets. Sports remains a passion, and Michigan football is my favorite. Many people are surprised by how much I know about football. I’ve attended the Michigan Women’s Football Academy several times, which is where I’ve learned the nuances of the game. When I went to Medill, there were only a handful of female sports reporters. Although I never seriously considered a career in sports journalism, I like to joke about how I could have been the Indian Erin Andrews if I had played my cards differently. Recently, I started writing a series of articles for The Wolverine.com addressing sports related injuries—combining medicine and football. I’ve written on topics like ACL injuries and turf toe. Sometimes I even join the editor on a daily podcast about Michigan sports, which is so much fun. I recently sent a link to a colleague who responded, “Wow—Rivals.com. Forget JAMA. Preeti, you have arrived!”